First Half, Half Marathon

Just a quick race report. Today was a really fun day. The race was super well organized, the volunteers were awesome, the weather was perfect. I ran a personal best, my official chip time was 1:51:04. I am super proud of this finishing time.

I was very nervous at the start, so much so that I decided to go to the roundhouse/ start line alone. I did my warm up and my pre-race stretching all by myself. Standing in the chute before the gun I was so nervous I was actually shaking. As soon as I got running and settled into my pace I started to relax. The race was mostly mentally hard. There were a couple of times when the negative self talk got to be a bit much and I really had to think about what my coach had said. I had some calf discomfort and arch cramps in the last 3km. Overall though it was good. Hard work pays off. I can't believe I shaved more than 8 minutes off my personal best. I am soo happy! I feel so accomplished! Proud, proud, proud!
Posted by kjoto at 18:11 2 comments:

I'm sitting here, hydrating, thinking about the race tomorrow and getting very anxious, my heart is fluttering. I have set myself a very arbitrary goal time of 1:49:59 which is nearly 10 minutes faster than my current personal best. My current pb is 1:59:20 on the same course a year ago. I'm stressing out cause I'm worried I won't achieve my arbitrarily set goal time. I think I've lost the plot. I need to remeber why I love running in the first place!

I'm going to stop worrying, enjoy my evening and stop being a crazy person. I'll wake up in the morning and run a great race no matter what the clock says. I'll have fun and do my very best cause after all, that's why I do this right? :)

Monday Morning Edit: Race times have been posted. Official chip time was 50:01, I finished 16th in my age group. How exciting!

I am officially done the Nike study. I had a really great time at the UBC Fall Classic today. I ran into Maha, the study director a couple of times. She wrote my name on her hand and asked me my goal time. I said 52 minutes but I thought it would be highly unlikely that I actually run that fast. I honestly felt like 52 was a really, really ambitious. I've never gone under 55 in a 10k and my avrg 10k time is 56:02. So I thought shaving 4 minutes off on a 10k would be hard. Walking out to the start line I was so nervous I actually thought I was going to barf, my heart was racing. I always get like that at the start line. I left my friend and went closer to the start line. I have figured out that I run much faster alone, racing 10k alone is easy..not sure if I'd run a full alone.

This was the first time that I didn't talk to anyone/strangers during the run. There was a guy on the course that I wanted to talk to cause quite frankly he was pissing me off. Cause he kept passing me. Like frequently. And he was wearing DENIM cut offs. Denim cuts offs and a tee-shirt, in -4 weather. He was run walking but in very short intervals. I've never seen anything like it. I would catch up to him and he'd stop and walk, then I'd see him passing me like 2 minutes later, as soon as I passed him he'd stop and walk again. It was bizzarro. I want to know what the heck he was doing.

I wore the Vibrams 5 fingers with socks for the first time today. It added a bit of warmth but I have to say that by about 3k into the race my feet were numb and really cold, I was actually concerned. But once I hit the hills it got much better and my feet started to warm up. When feeling returned to my toes the run was much more comfortable! I also have to say that the socks and vibrams probably made me look pretty awesome, I had some pretty sweet fashion going today and I bet it made me run faster. :)-

The interesting thing that happened again today, that has been happening since I started running in the vibrams is I couldn't feel/figure out what pace I was running. Its like my output doesn't match my effort. I used to have to push it soo hard, until I was uncomfortable to run like a 5:30 km and now with what I perceive as way less effort I'm easily running a 5:00 km.

I felt like I was running super slow so I got Runmeter to chime in and I was currently running under 5min/km with average under 5min/km. For the record, that's really fast for me, like crazy fast. Yet, I felt like I wasn't moving, I didn't even feel like I was giving it 80%. I mentally and physically felt like I could run so much harder/faster but my legs just wouldn't do it. It's strange. I didn't feel uncomfortable like I used to when I'd push it in the past. Maybe I need to spend more time on the track and work until I'm uncomfortable to have a gauge for racing? I don't know. I didn't do a lot of the track workouts like I was supposed to, in fact I think I did 4 of the 14 (only 1 was actually on a track, the other 3 were treadmill). Maybe it would have helped. I feel like I could have ran it so much faster but something was holding me back. Saying that, I also want to say that I am ecstatic with my time, I'm very proud of it. I just think it could have been faster. I really need to find a track group that can run when I can run. I know of a few groups that I'd love to train with but I work too late.

I crossed under the finish line at 50:19. Maha took a photo with her iphone, I'll upload it when she sends me it. I yelled out "F**k Yeah" as I crossed cause I was so excited. I didn't think it was loud but she heard me so it must have been. Like I said, I'm proud of my time. Meeting my goals and exceeding them is great motivation to keep going.

Just revisiting my race report from the full 7 months ago, cross posted below from @dailymile. I wanted to re-read this to talk myself out of running the full in May, except I'm pretty sure it's had the opposite effect on me. After reading it I  feel really jacked up for my 10k race tomorrow in my vibrams. I really excited to run a 10k that I trained for!

Just had my first ever run in the snow in my Vibrams. For the record my favorite runs are in bad weather, give me rain and snow over hot sun any day. There is something so still and peaceful about running by yourself in crap weather. I know I winged a lot about yesterdays weather but it was still quite nice to be alone on the seawall with nothing but my foot falls to keep me company.

However, tonight my feet were cold after about 5 seconds and were so cold by the end of the short 30 min run that my toes and the tops of my feet were numb and tingling. It was actually painful. It's one thing to enjoy solace, another to be so uncomfortable you're in pain. As much I hate to say this, I think the Vibrams will be for indoor and summer running only. How sad. I really love to run in them. Perhaps I will explore the sock option however, I don't think it will actually add much in way of protection from the elements. Don't know til we try. Have you had any experience running in colder weather with vibrams? How do you do it?

I really hope it isn't snowing on race day or I'll be one cold little lady!
Posted by kjoto at 20:43 6 comments:

Today marks my 5 month "anniversary" for lack of a better term on Paleo. I thought I would celebrate by posting one of my favorite indulgent recipes.

I met a dietitian about 3 months ago that specializes in Paleo nutrition, among other things. She gave me loads of great advice and great recipes and I would like to share one with you. 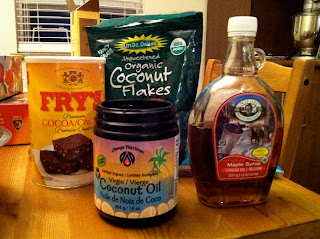 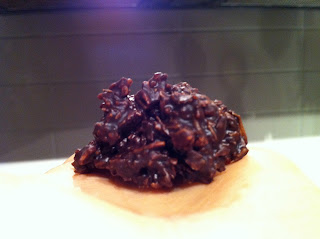 2. Mix all ingredients together and form into balls
3. Pop into fridge and let set
4. Try not to eat all in one sitting
I have taken these little treats to parties, had them as dessert at my house, I've even given them as gifts. Everyone loves this simple, easy delicious recipe. I hope you will too! :)
Posted by kjoto at 17:30 No comments:

My race goals for the first half of 2012 are as follows (I've read it's useful to write down goals so that you actually achieve them, I'll one up that by publishing it on the internet where no one will ever read it)

February: First half  My goal will be, as usual for a half, a PB.

(Technically my best 1/2 is 1:59:03, which was unofficial since it was the first half of the marathon in May. I did officially finish first half this feb in 1:59:20. It makes me very happy that after like 4 years of trying to break 2:00 in the half and coming very, very close on many occasions that I did it twice in 3 months.)

My goal for this race is 1:49:59. I am very confident that after aprx 12 weeks of training with a coach that I can achieve this goal. We did a lot of strength training and drills in the early days at the track and for the last 3 weeks have done M-pace long intervals. As long as I can mentally and physically recreate those training runs I should be able to reach my goal.


March: UBC Duathlon This will be my first ever race involving a bicycle. I'm a little nervous about the transitioning but think it will be fun and a great way to keep me motivated to cycle this fall/winter.

Feb 5, 2012 Edit: I wont be doing this event. I volunteered for Chilly Chase a few weeks ago which gets me free entry into Green Sock Half which i would rather do. Especially since it's free.

May: BMO Vancouver Half Marathon I'll be training for the full with the girls, but racing the half with my Dad. We're planning to finish together. My Dad ran me in for my last full but we have not raced together side by side since 2007 when we finished in 2:01:56 at the time a PB for me and a slloowww finish for him.

June: Scotia Half I've always wanted to run this, and have even signed up for it on a few occasions but have not ever run it. In 2012 I finally will!!


I may also do some 5ks along the way depending on their schedule. Short races are fun! And I do intend to run a full marathon in the fall, just have not decided where or when yet.
Posted by kjoto at 13:34 No comments:

kjoto
My name is Karla and I write "Primal Feet Running" to share my experiences as a participant in a UBC minimalist running shoe study. I have been running for about 5 years and have recently enjoyed a lot of personal success in running. I also embrace the Paleo lifestyle. Thanks for reading!